Social Impact: Championing the buy-less movement with a truly unique approach to ceramics and home-ware.

East London is one of those areas where, above everything else, dedication and craft is put into everything its inhabitants do. Craftsmanship oozes out of the pores of this postcode, so it’s no wonder that so many have adopted it as their home while they practise their skills.

Ana Kerin of KANA London is a perfect example of this; originally from Slovenia and after several studio moves, the locally famous ceramic studio has found its long-term home in the narrow streets surrounding London Fields.

A classically trained sculptor and fine artist, the story of how she came to be the pioneer of a ceramics movement that’s changing the way we buy is a fascinating one, so when the Paradise Row team had the opportunity to sit down with Ana, we couldn’t wait to learn more about her creative journey.

We managed to get some time with her amidst her work in KANA’s beautiful loft studio; it’s a space that commands light, even though we visited on a breezy spring day, the white walls, warm smell of kiln cured pottery and beautiful earthy colours transported us to a world where the East London drizzle doesn’t exist. Indeed, it felt more like we’d walked into a gallery than a workshop, but this a complete extension of the KANA ethos, something Ana’s light up about as she talks:

“I love to believe that in this world KANA fills the gap between art pieces and functional objects. It’s when something so simple can elevate your everyday life experience and by bringing these pieces into your life, it’s a sort of silent revolution.”

The studio is a treasure trove packed with glazed batches of ceramics, with shelves of blues, greens and nudes and dark curtains shrouding the collections not ready for the world yet. In such a serene setting, any revolution that were to take place would definitely be a silent one, Ana tells us it’s certainly one that’s seen a long journey:

“I had always been making ceramics alongside my practise as a sculptor, but it wasn’t defined as a ‘thing’, I was just making pieces for me and my friends to have lunch together. But, after a while, I was asked how much they were. It was only when I moved to London in 2011 that I started to consciously turn it into my practise.” 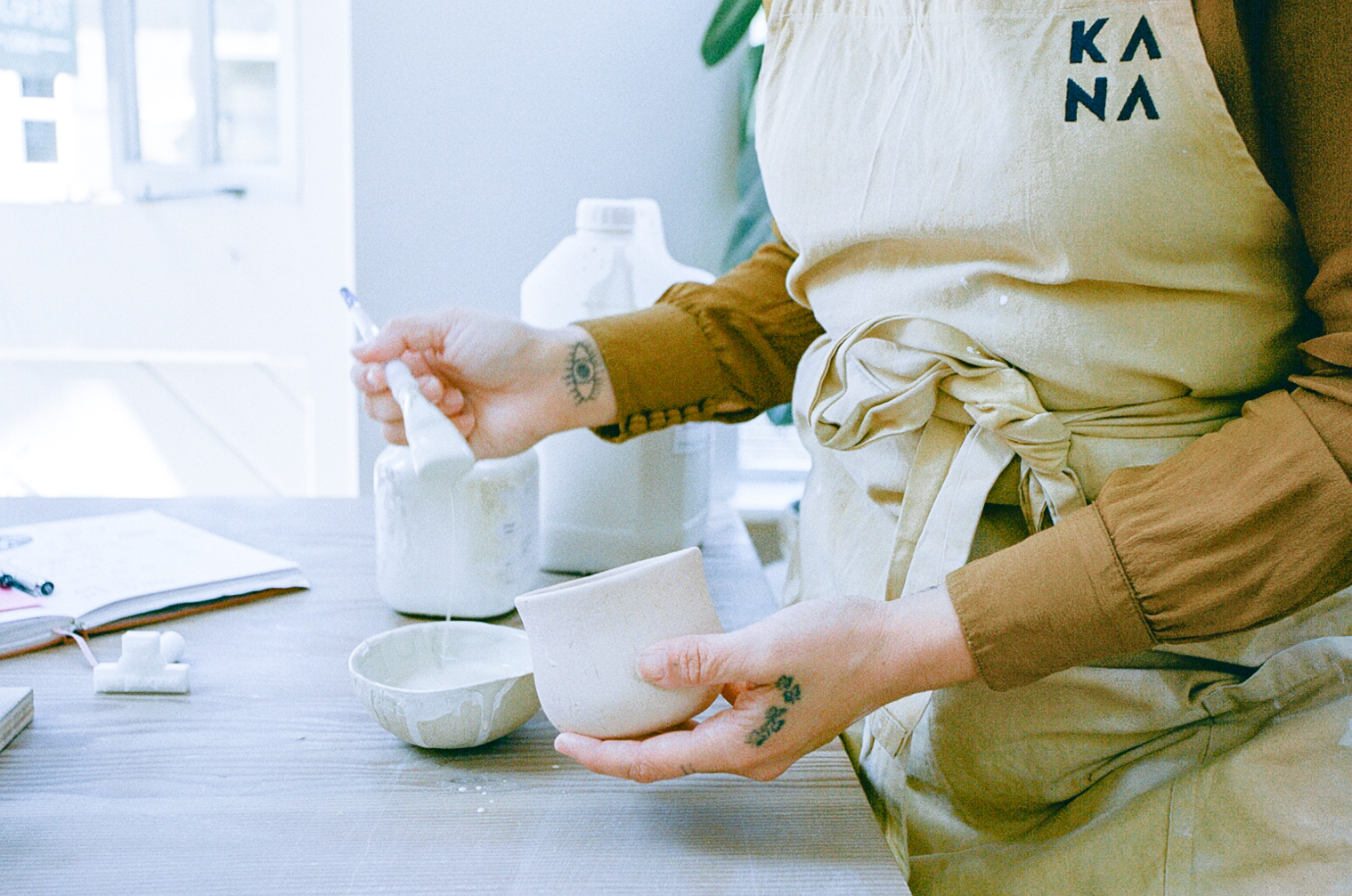 Her practise is one whose style has been refined and made her own over a number of years, we asked her what her secret was behind her unique voice in the ceramic industry:

“I don’t use a wheel at all, my classical training informs a hand-forming technique that I would use just as if I were forming a human body.”

So you’ve never thrown before?

“I never planned to be a potter! I’ve never been drawn to that technique at all.”

“It’s a completely different aesthetic. An incredible amount of hours goes into training, but the end result is trying to achieve ultimate perfection between the pieces. For me, it removes all distinguished style and being an individual. A good thrower will be proud to say that they can throw a thousand cups that looks exactly the same.”

A sense of imperfection runs throughout KANA London, whether it’s the sculpted nudes that still have thumb prints or the raw edges to each plate, there’s an obvious artistic pride in purposeful flaws. This is something being explored further with the kintsugi workshops that are coming to KANA London very soon:

“We have a Japanese master coming in to teach it [kintsugi]. She wants to heal cracks in pottery with golf, rebuilding broken pieces and embracing the imperfections and cracks quite literally! I’ve found that people love spending their time and money on experiences rather than products.” 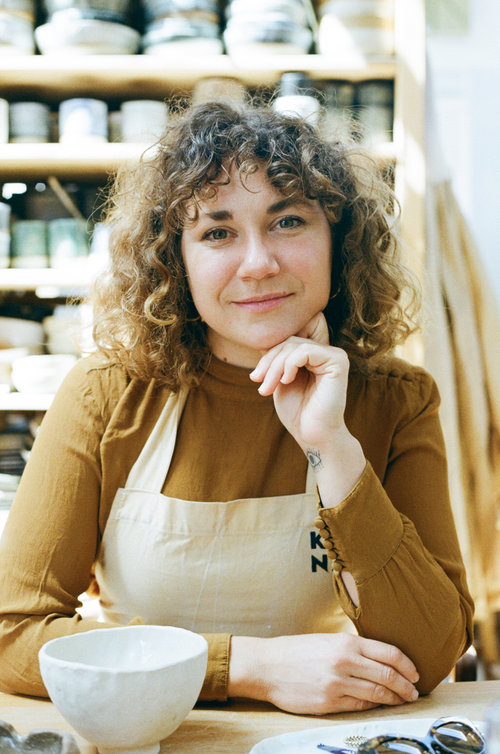 It’s an ethos that resonates with many, but she insists that she’s part of a movement that’s being felt worldwide:

“It’s a different take on consumption as we know it; investing in pieces that really matter. If you look back at our grandparents, they’d buy for life, they wouldn’t buy for every single season like we’re encouraged to by big brands. They had dresses and suits that were made to their bodies, not a one-size-fits-all kind of buying that we see today.”

I remark that this is exactly what we’re trying to promote with Paradise Row, it’s not about seasonal fashion anymore.

“It’s how I see Paradise Row too! It’s a way of living that we need to embrace more; investing in one beautiful bag or bowl or  that never goes out of style.

It’s difficult to go out of style when demand is so high for iconic design, I had to ask her about how the infamous tableware with the word ‘FUCK’ emblazoned across it. It’s an instant reference to an in-joke shared by hundreds of her customers:

“It happened out of my frustration if I’m honest! The FUCK plates were my private joke I had with myself, I was working on a really important comission when I had just started KANA and everything seemed to be going wrong that possibly could! The kilns broke, the product was drying out too quickly because it was so hot, and I was testing refiring them to try out the glaze.”

I would usually just do splash on top to see if the pigment sticks but the mood I was in I wrote FUCK to test how the pigment would respond to the glaze.”

So how did they make their way to the dining tables of hundreds people?

“I had them hiding in my studio on the bottom of my shelf but clients kept asking if they could buy them! Every culture has a different sense of humour but I think the British have really resonated with this particular product, I’m so surprised how many people have bought them for their mothers!”

It’s a culture we all love to be a part of and one KANA London, and Ana have made their home, but is it something specific to London that explains why the business has been so successful in general?

“I believe I was just in the right place at the right time, people are inverting and rerouting to things that are handmade, I suppose it’s something that resonates particularly with the English.”

I can’t help but ask about something that’s been staring me right in the face - literally - since I first arrived to the studio; Ana’s second pair of eyes that regularly feature on KANA London’s Instagram, one tattooed on each wrist. As someone who has careful process and meaning behind everything they do, I ask what their purpose are.

“The eyes? They symbolically mean that my hands are my eyes, the tactile experience is so important to me and my work and runs through everything I’ve ever created.”

Book a pottery class or find out more about Kana London’s stockists.