Social Impact: Pioneering floristry as a modern art for everyone to enjoy, through innovative and imaginative design.

While #ParadiseRowCurates serves as the platform that tirelessly reports on the East London creative community, it’s also a space that has been - in a completely unplanned way - somewhere to document the most exciting entrepreneurs and new businesses of the area.

There’s none that are closer to home than florist extraordinaire and frequent Paradise Row collaborator, Holly Clemett of POLLENET. You might recognise some of her incredible floral installations from our #ParadiseRowCurates events and our HOURGLASS launch party, and we couldn’t be more proud than to be one of the brands that supported her in what’s just been her first year of business. Now, with clients such as Women Who, FACEBOOK and Modern Society; we sat down and discussed the passion and journey behind her rapid rise to the top of her game, in the presence of some beautiful arrangements and a lively Dachshund.

First of all, congratulations on trading for one year in your first business!

“Thank you! Actually in my calendar today it’s marked that it’s been a year since I set up my website.”

Taking it back to where it all began, where was the seed first planted that you might become a florist? Were you always creative growing up?

“Well, I’ve always felt quite creative but floristry didn’t come until really soon before POLLENET happened. I moved to London about five years ago and was really adamant about two years in that I wanted to start up my own business. I hate being governed by someone else’s time; instead of wanting to make someone else successful, I want to make myself successful. I remember saying to my family, if I worked as hard on myself as I currently did for someone else, something amazing could happen.”

How did you come up with the idea of floristry?

“Well, my first idea was actually dog walking, but then I went off the idea. For ages I knew I wanted to start something but didn’t know what it was, but then one day I went to Columbia Road flower market and put my flowers that I’d bought into a vase. I remember I said to my boyfriend ‘oh, it’d be so nice to be a florist’ and he just told me to go for it! I was really office based so it was so exciting to get more of a tactile creative experience in my life!”

You’ve developed a really bright and bold signature aesthetic; is it something you’ve always wanted to achieve, or do you find that it’s a look a lot of people are after?

“When I first started out I thought that my flowers would divide people and that not everyone would love them - but now I’m so glad they do. If you have a product that everyone loves, it just blends into the background. Flowers can be really fun, while you can still portray that with whites and pinks, if I was going to have something in my house every single day, it would involve a colour clash and stand out. I quite like finding the perfection in imperfection through flowers; people look at my flowers and they don’t know why they like it, but they do. I think if I look at photos of POLLENET ages ago, the style had definitely evolved.” 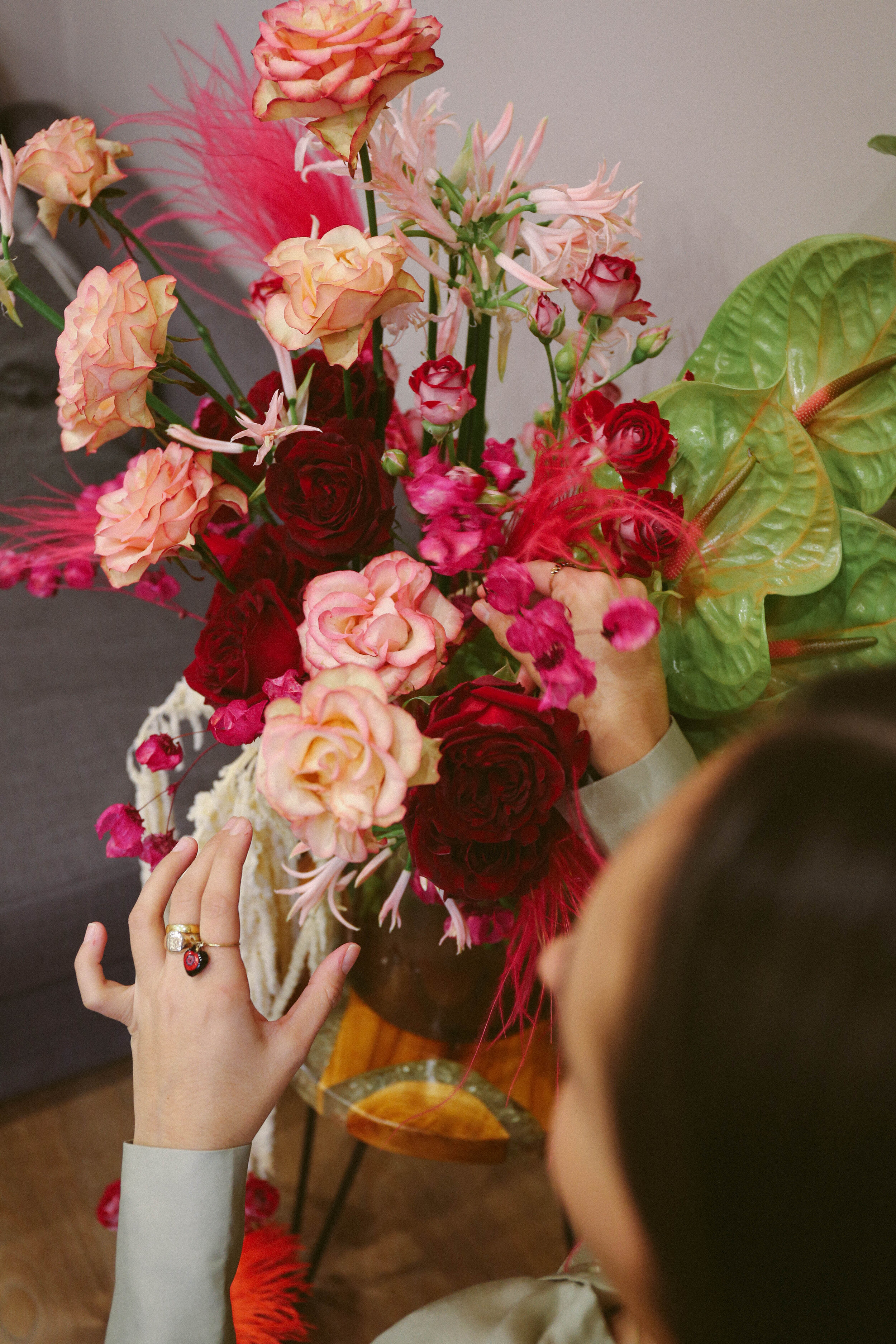 Why do you think there’s been such a big shift back to floristry? When we were growing up it was associated with older women, super markets, and only special occasions, but now there’s been an influx of delivery brands, a surge of independent florists and more people taking it into their home on a weekly basis. Why do you think this is?

“I think that, ultimately, flowers make people happy; no one’s going to get a bunch of flowers and say: ‘That’s really pissed me off!’ They’re only around for a little while, so if you see really amazing flowers a lot of people will comment on them, they’re like a piece of art.

It always brightens up someone’s day, and there’s also so many new flowers that wouldn’t have been considered ‘nice’ 10 years ago in the industry as it was quite contrived - it’s really opened up in that way. There’s a new artistic side to floristry that people really love to see, it’s rooted in getting younger people more involved as well. In terms of why people are bringing them into their homes more, anyone can buy flowers, you don’t have to be a certain person to get them, they’re available to everybody.”

Let’s talk more about the practicalities of you setting up your business, what were the biggest learning curves?

“To be honest, I think that any big challenge I faced was completely imagined by myself. I think thinking about doing something is so much more difficult than actually doing it. Freaking out about leaving flowers on someone’s doorstep and then it being absolutely fine, for example; I think setting up a business has been both easier and harder than I thought it would be. Ultimately I love making flowers but I’m learning all the time about running a business and all the little things involved in that.

What’s the biggest bit of advice you’d give to someone wanting to start their own business?

“I think that something that’s really important in life is building bridges, setting up relationships and just being nice. I think the biggest lie about this kind of thing is that you have to be a certain kind of person to set up a business. I’m not a white, middle-aged man, I’m not outspoken or the loudest person in the room. I think all you need to be is a little bit switched on to know what you’re doing.” 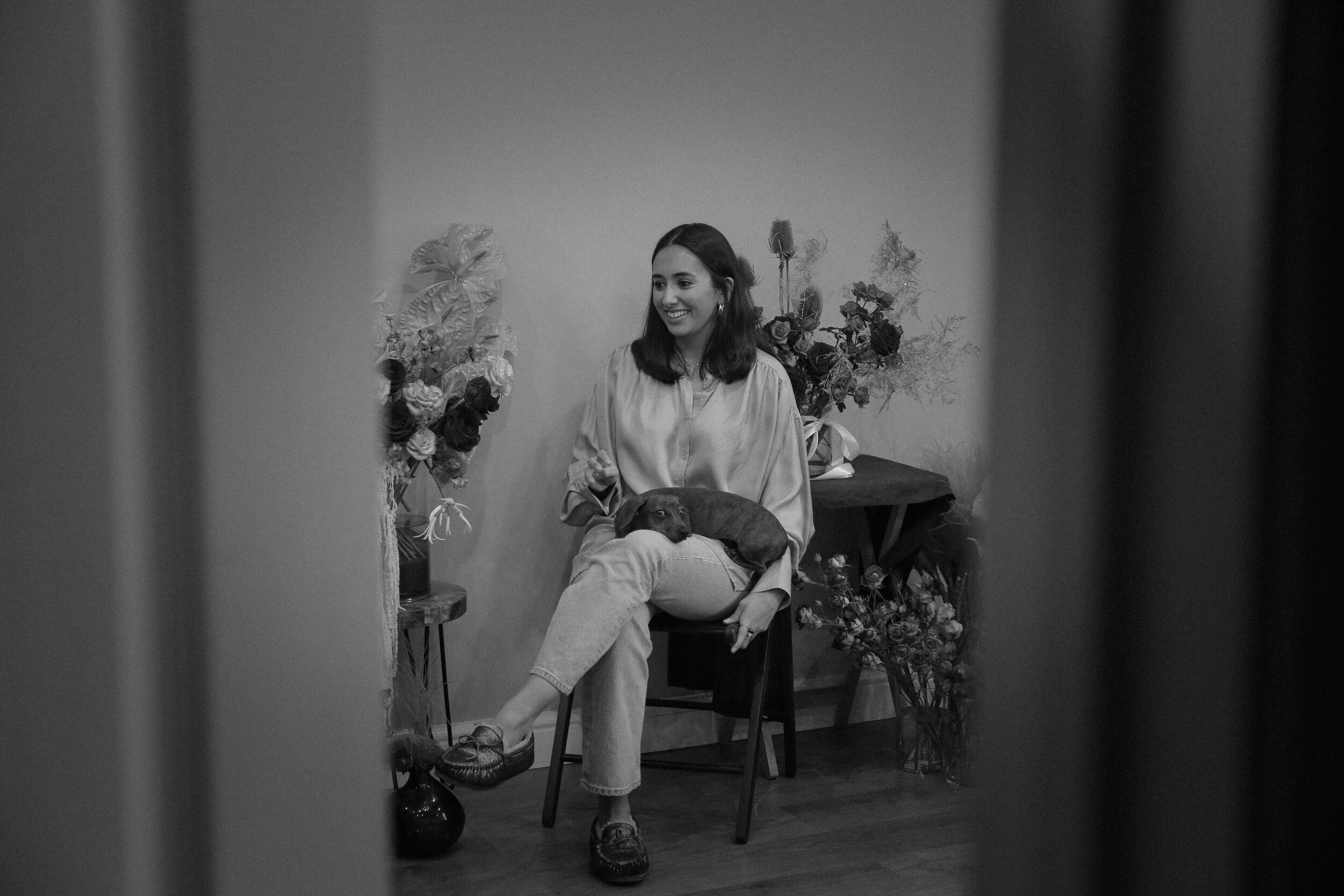 What’s been your biggest highlights of your first year of business?

“Definitely working with some clients that I could never have imagined to work with for the first year: FACEBOOK, Wonderland magazine, having my flowers next to Emilia Clarke; and the feedback from those people, it’s given me the confidence to carry on. It’s good to hear good tings about something you’ve made. Flowers do make people happy so when that’s confirmed that’s amazing!”

You’ve mentioned that a lot of people have discovered you through Instagram - how important do you think it is to a modern business?

“I don’t think I’m great at Instagram at all. I don’t have a specific filter I use on every photo - I’m not that edgy. I think it’s just one of the most important platforms you can have; you can connect with millions of people if you want to. When you’re working from a little basement flat in Peckham, it’s the easiest way to say ‘Hi my name’s Holly, I made some flowers you might like: here they are.”

What are you most looking forward to?

“I think I’m looking forward to whatever happens next! I really enjoy opening my inbox and seeing something I didn’t expect to see. If you’re the person reaching out and something comes of it that’s obviously really exciting, but when you hear from someone coming to you that you look up to, that’s an amazing feeling.”

Get your hands on a POLLENET bouquet and stay up to date with her next move.