The caption to one of her latest Instagram posts reads: “If you don’t terrify someone a little, what’s the point?” Indeed, drunk priests, smothering shadowed lovers and decapitated sex fiends are just some of the characters that call her obscene works home; these paintings are her children, ambiguous and terrifying in equal measure, and the prospect of meeting their as-of-yet faceless mother was one that was very intimidating.

Ten minutes later, she sits opposite the Paradise Row team cradling a cup of tea in front of me like a crystal ball:

“Yesterday I spent all day building my easel.”

Oh de Laval, whose name we find out to be Olga, recounts her day calmly, but the jarring contrast between the gory sex parties we were familiar with and the woman wearing a kitsch star-shaped diamante hair clip sat in front of us was one that had us reeling. Fresh from an expo in Paris and preparing for one in two months, it’s safe to say that Oh de Laval is an artist also in high demand, but it’s something she insists is something she doesn’t try for anymore:

“The art world is very closed and as a young painter I obviously really wanted to get in. I was refused by the art schools and everyone I had approached, so I painted in my room and posted my art on Instagram. Suddenly these artists, professors and professionals started contacting me when I was focusing on my art and progressing myself: I refused to beg and people came to me.”

Oh de Laval is just one of the many young painters who have found their feet in the art world through the social media platform of the moment: Instagram.

“My business is based on there, I don’t have the chance to travel to New York, to Australia to South Korea [to meet with curators]. To me, Instagram is everything.”

I asked her if she thought the world of social media would take over the art world fully:

“At the end of the day, I want to make a good painting, not graphic design, I want to hang my works in galleries in the real world.” 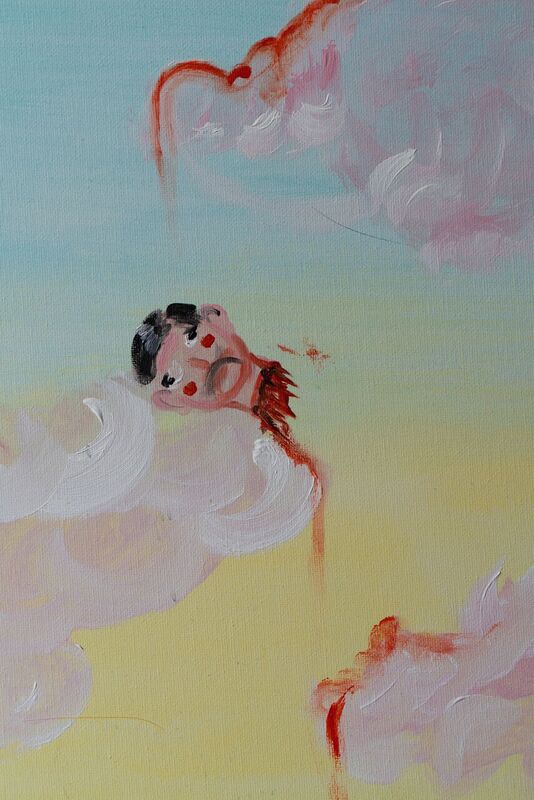 And why shouldn’t she? Oh de Laval has been dedicating every weekend to her paintings since 2013. A pastime she formed as a child, it’s become a habit secondary to her living.

“It [the art] excites me when I paint I want to be excited about it. It should be well painted technically but should also be interesting to look at. I was an only child, so when I was bored my mum would say ‘paint something!’”

I assume (and hope) that her mother didn’t also encourage the subject matter, but apparently, she’s highly supportive of Olga’s artistic ventures: taking photos of her at her exhibitions and advising her business as a fellow woman with an appreciation for her art. I asked for her father’s opinions, conscious of the stereotypical yet society-wide elephant-in-the-room for fathers and daughters and anything sexual:

“My dad still thinks that my day job is the main thing [in my life]! He just doesn’t understand where the art comes from, or how I can be like that. I’m his daughter and a ‘virgin’ - he appreciates the money though!”

If there was one thing I could have surmised without meeting her at all, it would be that her work hadn’t come from the imagination of a virgin. So, with the ice safely broken, we ventured into the subject area of sex: a theme rife with complexity and terror for the artist. Half Polish half Thai; her perspective on the matter is unsurprisingly international:

“Sometimes I find it like a joke, I find sex can translate into your life […] I like presenting rough and savage emotion.”

Savage to the extent of decapitation?

“This is part of my joke! I try to show what people would do if there were no consequences in this world.”

It’s clear the tongue is firmly in her cheek, an attitude that she is conscious of in her work, but she made it clear there’s also a cutting perspective on gender politics to be understood:

“I believe we live in a man's world, but as women, we have amazing power; we don’t need to over them: we can beat every man through seduction. In my opinion, you can overpower men by being yourself [as a woman]. Feminism isn’t a subject in my art but finding this fun in darkness. I like seeing what people are afraid of and why.” 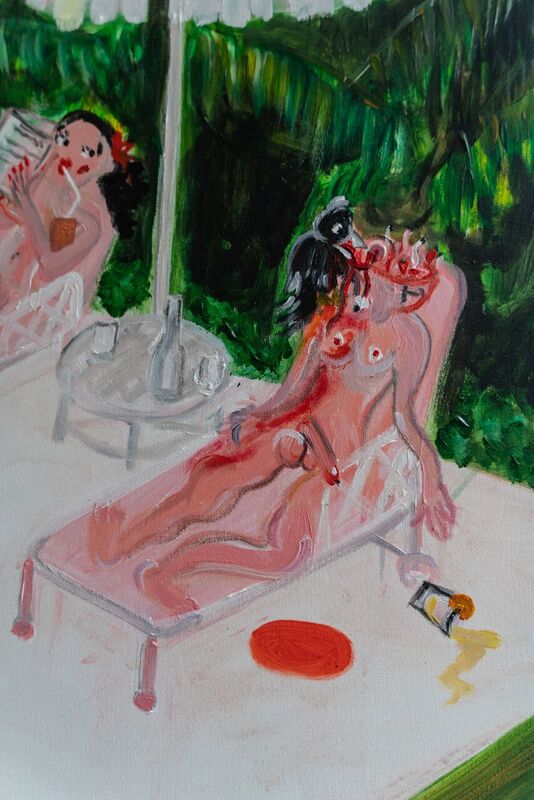 It’s a concept that would be incredibly well received in the edgy area of East London that we call home, but we were curious as to how the rest of Britain reacts to her art.

“Paris is very kinky so they love my paintings, English people find it intimidating, it’s different but good different.”

A painting should not be placed in every culture, though, if you want it to be timeless you should connect to everyone and no-one at the same time. It’s all about emotions for me. A painting is a piece of magic: don’t ask me what it means, what do you feel?”

So none of your paintings are inspired by experience? Where do you get the inspiration to create these scenarios?

I wonder, and instantly feel stupid doing so, if she feels the London grind of her day job is restricting her and her art:

I asked if she felt sorry for them. For a second, her eyes shine with exactly the terrifying animal-like ferocity I was afraid to meet before she arrived:

“You need to remember that this London. I have NO MERCY tattooed on my thigh for exactly that reason: there is no mercy here.”